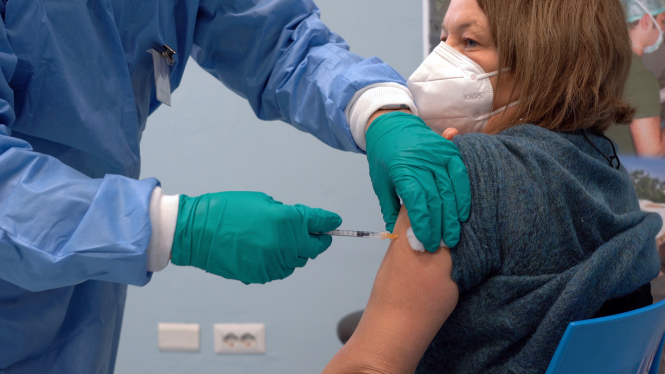 The government is stressing the importance of vaccinations and booster doses in the fight against the fifth wave Pic: DELBO ANDREA / Shutterstock

These areas of interest were announced by government spokesperson Gabriel Attal this afternoon (November 24), as he emerged from the latest Conseil des ministres meeting. They will be put to Parliament later today and local officials on Thursday.

“Our situation in terms of the epidemic is getting worse,” Mr Attal said, adding that it was crucial to “save the end of year holidays” and “not to have to go back to capacity limits, and certainly not closures, curfews or lockdowns.”

He also announced that Health Minister Olivier Véran will be holding a press conference on the situation tomorrow (November 25) at midday. Along with other ministers, he will announce the new measures to be introduced in further detail.

“A few days ago I spoke about being at the beginning of a rapidly growing wave and that has now been confirmed, with an R rate [the number of people that one infected person will pass on a virus to, on average] estimated today to be at 1.6 and which will most likely continue to increase in the coming days and weeks,” Mr Attal said during today’s press conference.

“The number of daily cases has risen by nearly 80% this week to reach an average of 20,000 cases per day.

“Yesterday, more than 30,000 positive cases were recorded, a number which is comparable to that which was observed at the peak of the fourth wave.”

Mr Attal added that France’s infection rate is expected to rise from 191 cases per 100,000 people to more than 200 tomorrow or the day after, and has already reached this level in 34 departments.

Only Mayenne, Manche and Deux-Sèvres now have infection rates below 100 per 100,000 of the population, and around 6,000 classes have been sent home from French schools because of Covid outbreaks, an increase of 50% since last Friday.

Hospitalisations have risen by 40% this week but the situation remains “contained.”

“It is how hospitals are faring which is and remains the real crux of the issue,” Mr Attal added.

“Because the vaccines drastically reduce the risk of serious forms [of the disease], we are no longer seeing the same correlation as in previous waves between the number of infections and the number of serious cases which require hospitalisation.”

Read more: Covid treatments in France ‘to be available soon’

Mr Attal went on to say that official modelling of the current wave suggests that hospitalisations will remain under control as long as the country strictly adheres to rules and advice surrounding social distancing and hygiene measures, the health pass and vaccination and booster doses.

“It is essential that we are aware of these practices if we want to avoid reliving what we experienced during the previous waves of the epidemic, and what our neighbours are now weathering once again.”

France’s health service quality regulator, Haute Autorité de Santé has already recommended the vaccine booster for adults over 40 years of age, while the Conseil scientifique and the Conseil d’orientation de la stratégie vaccinale have advised that all adults are given the extra jab.

Read more: Covid boosters for all, jabs for children: When will France decide?

Is there any chance of a new lockdown?

Earlier today, Professor Arnaud Fontanet, epidemiologist and member of the Conseil scientifique, told Le Parisien that the possibility of another lockdown cannot be dismissed.

“We believed that we no longer had any need for it. But considering what is occurring with us and among our close neighbours, we cannot rule it out,” he said.

Prof Fontanet added that he had been “surprised” by the speed and aggressiveness of the fifth wave.

However, according to BFMTV’s doctor and consultant Alain Ducardonnet, a lockdown is not on the cards at this stage.

“Lockdowns, curfews...not for the moment, no,” he said, adding however that “the really important thing is [getting] the third [vaccine] dose.”