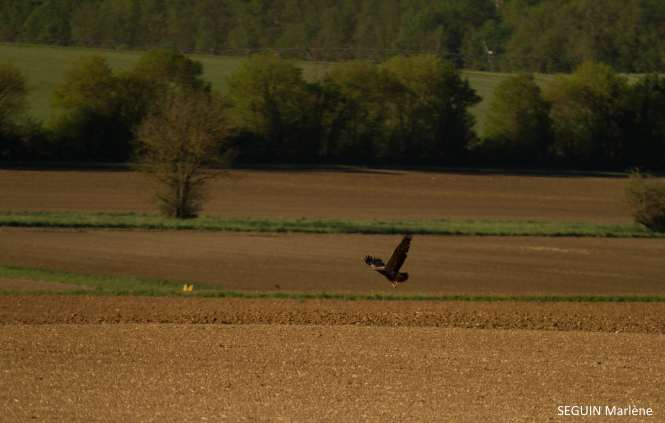 Marlène Seguin-Triomphe, who works with an environmental consultancy was walking, with all her work gear, over a small hill when she saw the bird on the ground, only 15 metres in front of her.

“I was very surprised, because it is a big bird and not at all what I was expecting,” she said.

“I stopped to watch and to photograph it, but it saw me and flew off slowly towards a wood on the edge of the field, and I was able to follow it, not too closely, and take lots of photographs, before it rose up, caught a thermal and disappeared.”

At the time she knew it was an eagle but did not know what sort so she sent her photographs to other ornithologists, who in turn sent them to a specialist who positively identified the bird as an Imperial Eagle.

It was the first recorded viewing of the bird in Charente ever, and one of only ten times that it has been seen in France in the last 30 years.

Imperial eagles are on the red list of endangered species.

“I waited a couple of days before announcing the news so that it would not be worried by hundreds of birdwatchers trying to photograph it, and then let people know – it is encouraging news in these strange times."

Imperial Eagles, which can have a wingspan of 2.16 metres, have darker feathers on the back than golden eagles, and their skulls have alight creamy yellow colouring.

They, are mainly found in South Eastern Europe, and West and central Asia, and feed mainly on squirrels and other small mammals.

Ms Seguin-Triomphe, who is a specialist in birds and mammals for the consultancy, said she was bitten by the ornithology bug while doing a work-experience spell 12 years ago during her studies in environmental science.

“Surprising for me, it quickly became a real passion, especially photographing birds, so now it is both part of my job and a hobby,” she said.

“I am always looking around to see what birds there are, identify them if I can and see what they do.”

The region has a number of birds of prey, including buzzards, short-toed eagles, falcons and owls, but usually none of the large eagles.

Imperial Eagles live in an area stretching from south east Europe across the Asian steppes, and the experts who identified it said the bird Ms Seguin-Triomphe spotted was a young male, probably two years old.

The experts say it is probable that the bird was blown West by the spell of cold Easterly winds which blew across Europe in late March and early April.

It is old enough, and in good enough condition to make its way back to its home range.

If it is photographed again, there is a chance that the experts will be able to positively identify it from the photographs taken by Ms Seguin-Triomphe.

There is also a small sub-species of Imperial Eagles in Spain, but they seldom leave their area.

“After the sad news of the Golden Eagle being killed in the south, it is encouraging to have some good eagle news,” said Ms Seguin-Triomphe.

“For me it was astounding and amazing to come across it so close and to be able to watch it for those twenty minutes, and I hope that it lifts the hearts of others too.”