Booster jabs against Covid-19 not needed in France ‘for now’ 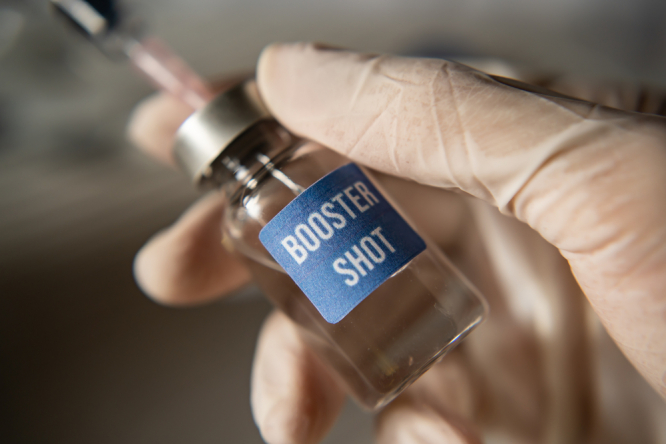 The HAS said that the data currently did not show that booster shots were needed for most people, but did not rule it out in future Pic: Wachiwit / Shutterstock

Not everyone in France will require a third dose of an anti-Covid vaccine “for now”, health authorities have confirmed, except for the vulnerable and elderly.

Health authority la Haute autorité de la santé (HAS) said on Friday, July 16 that “there is no need for the moment” to require most of the population to have a third dose of vaccine, “except for the most vulnerable and elderly”, given the “data available”.

In a statement, it said: “Even though it seems probable that a booster injection will cause a boosted effect [against Covid], the data available currently do not allow us to precisely evaluate the impact, nor the necessity, of such a recall to avoid vaccination failure.

“The priority over the next few weeks is to do everything we can to improve vaccination coverage, especially among people aged over 80, for whom vaccination coverage is still insufficient (75%) despite their significant vulnerability against the illness.”

It comes after President Emmanuel Macron announced, in his speech on Monday, July 12, the establishment of a “booster campaign” from September. This will apply to “those who were vaccinated first, so in January-February, who will see their antibodies drop, and their immunity lowered”.

The president made the decision based on advice from government advisory body le Conseil scientifique, published on July 9, which recommended “the anticipation, from now, of booster vaccinations in people who are aged over 80, or elderly care home residents”.

Globally, no health authority has yet issued a definite recommendation on this issue.

The HAS said that currently, “there is no argument to recommend the administration of a booster dose in addition to the people for whom this is already recommended by the government, whatever their initial vaccinations”.

Yet, the HAS did not exclude the possibility of booster doses for the general population in future.

It said it could recommend booster doses in future “if a drop in protection against Covid-19 seems evident on the basis of vaccination failure seen in real life (and not only in response to a drop in antibodies), or if a new ‘vaccine-resistant’ variant emerges”.

It called for all research on the issue to focus on infection levels on people who are already fully vaccinated, to determine the usefulness of a booster dose.

A study published this week found that only 6% of people who tested positive for Covid-19 between June 28 and July 5 had been fully vaccinated; dropping to 4% for people who had symptoms.

The same study showed that 80% of people who tested positive in the same week were not vaccinated.

The HAS in favour of mandatory vaccination

In a separate recommendation, also published on July 16, the health authority said that it considered mandatory vaccination for “professionals that are in contact with vulnerable people” to be “justified”.

This was one of the measures announced by the president on Monday, July 12.

He said that vaccination would become mandatory for 70 professions in the healthcare and elderly care sectors, with sanctions for people who do not comply. This will concern more than 1.5 million people, who will now need to be vaccinated before September.

The rule is expected to be confirmed during a Conseil des ministres meeting on July 19.

The HAS said: “The extension of mandatory vaccination could be envisaged for vulnerable people if vaccination coverage does not progress”.

It said that the question of mandatory vaccination for “most professionals in contact with the public, across the general population, also deserves to be asked”.

Currently, more than half of people in France have received at least one dose of the vaccine (36,766,279), and 40% are fully vaccinated with all doses required.

Protests against vaccination and health pass

The recommendations come as more than 100,000 people protested against the president’s announcements this weekend.

Opponents to the extension of the health pass and mandatory vaccination for the 70 professions concerned have said that the new rules amount to a ‘health dictatorship’.

It comes after President Macron also announced that the health pass will be needed to enter a wide range of public spaces that can accommodate over 50 people by early August, including restaurants, cinemas, shopping centres, gyms and for long-distance travel within France.

He defended the move, saying: “Should I close restaurants and cinemas again because some people choose to not get vaccinated? To these people I say: You cannot have the same rights because you have not taken on the same responsibilities.

The government hopes that this will encourage more people in France to get vaccinated, as fully-vaccinated pass bearers will be able to enter all public areas without having to pay for a PCR or rapid antigen test beforehand.

So far, this seems to be working in general. Directly after the president’s announcement on Monday evening, 17,000 vaccine appointments were being booked per minute.