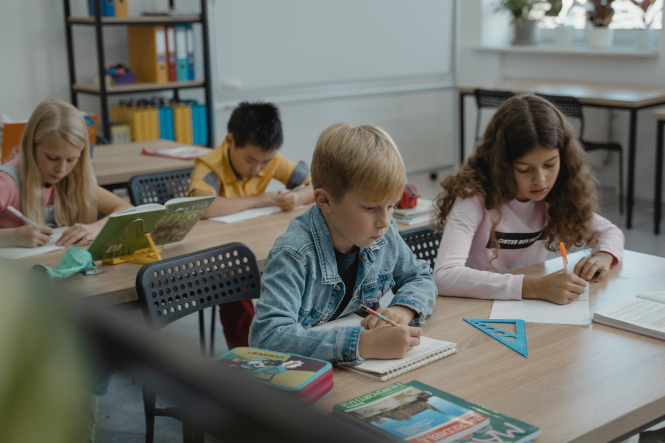 One expert has said that schools should not go back on April 23 as planned Pic: Tima Miroshnichenko / Pexels

The number of Covid cases and hospitalisations are stabilising in France, prompting questions over whether the peak of the third wave has been reached.

In the Alpes-Maritimes – an area heavily affected by the health crisis earlier in the year - the rate of incidence (the number of cases per 100,000 inhabitants in the past seven days) is 229 – the lowest it has been since December 17, 2020.

And numbers of Covid patients are going down in Nice CHU. Carole Ichai, head of anaesthesia in intensive care, told BFMTV: “Currently around 65-70% of patients have Covid… we’re not under the same pressure as we were with all the beds full.”

This is reflected in national figures. Since April 12, the number of Covid patients in intensive care has remained high but stable, at around 5,900.

He said: “All the indicators, including hospital numbers, have gently changed direction. This shows that the confinement measures are having an impact. But unfortunately, it shows that the impact is not as strong as it was during the first and second confinements.”

He said rather than a sharp fall in cases and hospitalisations, numbers had either plateaued, or slightly decreased.

Will reopening begin in mid-May?

This has led some to question whether the stricter rules will be eased, as currently expected, in mid-May.

Read more: Macron says terraces and museums to reopen from mid-May across France

Mr Crepey said he did not think numbers would fall further without stronger restrictions. As such, he said: “Any relaxation of measures should be very light if we want numbers to stay on a downward curve. We need to be very cautious.”

Dominique Costagliola, epidemiologist and biostatician from Insrem told FranceInter today (April 19) that she did not think a significant reduction in cases and hospitalisations was possible between now and mid-May.

She said: “We have not seen a net reduction in the number of cases, rather we can see a high plateau, even though we are testing less.”

The decision to reopen schools on April 26 should be reconsidered, as closures have been “lighter than what we have seen before, with no logic to the decision”, she said.

France’s Conseil scientifique has also said it is concerned about BR-P1, one of the Brazilian variants, becoming the main strain of Covid-19 in France.

It is not known if it is more dangerous than the UK variant, but it is highly transmissible and reduces the efficacy of mRNA vaccines such as Pfizer and Moderna.

In a statement from April 16 the health advisory body said a risk in the rise of the variant is possible in summer 2021, although “there are currently no signs” that circulation of BR-P1 is evolving from current “minimal” levels.

No clusters of the variant have been identified in mainland France, but circulation has been rising steadily in French Guiana for the past four weeks. There have been calls for new restrictions in the overseas territory, such as increased curfew measures and confinement on Sundays.

The Conseil scientifique has advised that flights between Brazil and France remain suspended. Flights between the two countries are currently suspended until April 23, although French and Brazilian citizens still have the right to return to their native countries.

It has also suggested that flights between France and other countries in South America are suspended as a precaution – which the government has not done, so far.

A statement from the Prime Minister’s office said: “Other countries could be affected by measures based on criteria identified by the European Centre for Disease Prevention and Control.”

However, ten-day quarantines are required for anyone arriving in France from Brazil, Argentina, Chile and South Africa.

These rules also apply to people arriving from French Guiana.

This comes as President Macron said yesterday that French borders will reopen for visitors from the US from “early May”.

6 hours ago
5
How will France’s health pass work in cafes, bars and restaurants?