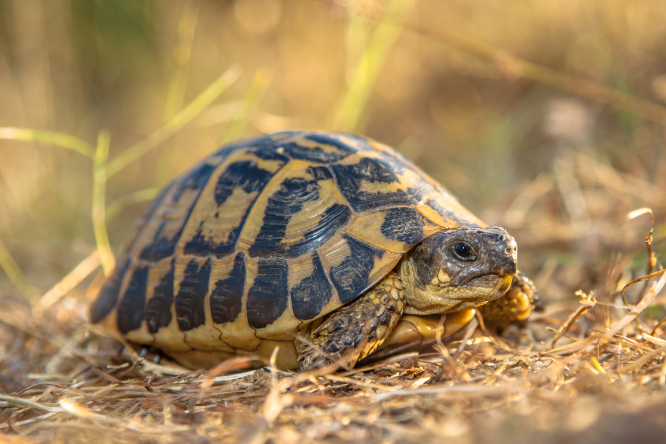 The Hermann's tortoise is only found in France in Corsica and Var, a department which has this week been ravaged by a 8,100 forest fire Pic: Rudmer Zwerver / Shutterstock

The forest fire that has burned over 8,100 hectares in the Var has devastated the habitats of more than 250 protected species, most notably the rare Hermann’s tortoise.

This small to medium-sized species of tortoise – named after the French naturalist Jean Hermann – is only found in France in Corsica and the Var, where 10,000 of its 15,000-strong population are thought to live on the Massif des Maures.

The Hermann’s tortoise is classed as “vulnerable” on France’s red list of endangered species, and “at risk of extinction” in Provence-Alpes-Côte d’Azur.

Hundreds of tortoises are sure to have perished in the flames that have raged across the Var’s Massif des Maures this week.

However, these creatures may be better equipped than most to protect themselves from the flames.

Tortupôle France, an organisation which unites several conservation bodies including the Carnoules-based tortoise sanctuary, le Village des Tortues, has estimated that 60% of those found since Tuesday, August 17 were still alive.

“These tortoises are able to bury themselves under rocks and vegetation to such an extent that they practically disappear,” sanctuary director, Dr Franck Bonin, told The Connexion today. This ability may have saved many from the flames.

However, it is feared that more of the animals will be found dead as rescue operations continue in the coming days.

“So far, we have received around 20 injured tortoises in the Village des Tortues,” Dr Bonin said.

“At the moment, we are seeing between one and seven tortoises arrive each day. Our teams are also on the ground across the Plaine des Maures, looking for injured animals.

“When they find a tortoise which has been left unhurt by the fire, they will spend some time rehydrating it, before leaving it within its natural habitat.”

Rescued tortoises are treated by the centre’s specialist staff, who rehydrate them several times a day with glucose solution, also injecting them with antibiotics and anti-inflammatories if necessary.

Tortoises that have been burnt in the fire will have their wounds cleaned and then treated with healing creams to prevent infection.

“The tortoises are later cared for and kept under observation in our Tortupôle centre until the end of September,” Dr Bonin adds.

“Once we are satisfied that they have recovered from their injuries, we will release them back into the wild after the first rains at the beginning of October,” when the vegetation that they eat has begun to grow back.

Members of the public are reminded that it is forbidden to pick up and remove a healthy tortoise from its environment without permission, and those who do so could risk a 3-year prison term and a €150,000 fine.

Encouraging people not to touch any tortoises they may see, the Village des Tortues said that for these animals this would represent “a second catastrophe to follow the fires.”

“Many people are wondering what will happen to the tortoises that have survived the fire.

“These are resilient animals [...] if they have got through this, they are unlikely to experience any further problems: the hardest bit is over.”

From endemic plant species of chaste-tree and quillwort to the ocellated lizard and the European bee-eater, the Massif des Maures had been one of France’s richest havens of biodiversity, providing a habitat for more than 250 protected species.

This varied landscape could take several decades to return to its original splendour after the Var fire, according to François Fouchier of Provence-Alpes-Côte d’Azur’s coastal conservation body, Conservatoire du littoral.

Although certain species – such as the cork oak – can grow back quickly after a forest fire, if these events continue to occur, the natural environment will not be given a chance to recover.

Investigation into cause of Var wildfire begins as blaze slows