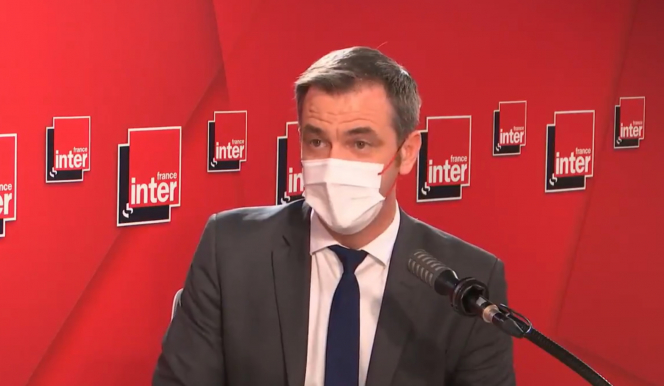 The health minister made the announcement in an interview with France Inter ahead of a meeting next week Pic: France Inter / @franceinter / Screenshot / Twitter

The Delta variant of Covid-19 will be dominant in France within days, the health minister said today, ahead of a meeting of ministers on Monday (July 12) in which they are to discuss whether new Covid measures are needed.

Health Minister Oliver Véran told France Inter that the Delta variant would be dominant “probably by the weekend”, and called on people to continue to “stay alert”.

The most recent figures (yesterday) show Delta at 50% of daily cases, but Mr Véran said: “The [Delta] variant is more contagious, 60% more, than the other strains that we have seen until now, and it is currently replacing all the others.

“The incidence rate [cases per 100,000 people] is rising, even though it is a lot lower than before. Each week, there are around 50% more infections than the week before, which is, alas, what we saw at the start of previous waves.”

He said however this did not necessarily mean we will see a new wave, but that we must remain vigilent. The "most probable" scenario was the virus would now continue to spread across the country, he said.

President Macron and ministers are to hold a “health meeting” about Covid on Monday, July 12. Any subsequent decisions are expected to be revealed to the public on Tuesday, July 13.

The meeting agenda will include topics such as whether extra restrictions will be introduced for the worst-hit areas of the country, whether to introduce obligatory vaccination for care workers, and questions on extending the pass sanitaire rules to other situations.

Ministers have not “ruled out” the possibility that President Macron will present new anti-Covid measures, perhaps as early as Monday 12, before the meeting at 19:00.

The president is also set to address the public on Wednesday July 14, ostensibly to present his plan of reform ahead of the presidential elections in 2022, although this could now include the announcement of further Covid-19 measures too.

A source said: “We have two areas of tension; Covid-19, and the economic restart. These will be the two major pillars of the end of the mandate.”

New Covid measures could delay any further reforms, it has been suggested, as the “fight against the virus becomes priority”.

Mr Macron has previously said that he will have to “take difficult decisions” over the summer, and that he would not be able to “manage the summer on an easy ride”.

President Macron has reportedly told ministers to think about “all possible defensive and offensive measures.”

It comes after government spokesman Gabriel Attal said: “There is a worrying situation in France. [Delta] is much more aggressive and extremely fast.”

Hospitalisations remain relatively low (749 over the past seven days), but the total number of new cases passed the 4,000 mark on Wednesday, July 7, and were at 4,442 yesterday (July 8).

An Elysée advisor said: “The curve is rising again exponentially because this variant goes four times’ faster than the UK [Alpha] variant, which itself spread twice as fast as the original strain.”

The situation is worsening fast in 55 departments, especially in the regions of Provence-Alpes-Côte d’Azur and Ile-de-France.

Additional measures such as reducing the permitted capacity of certain places, such as entertainment and leisure venues, could be envisaged; but at this stage new local or national lockdowns are not being considered, Le Monde reported.

For now, Mr Véran has said that vaccination is the “master map to the [light at the] end of the tunnel”, and said that “vaccination protects 100% against confinement”.

Today, Mr Véran said that ministers were working to agree on a “consensus” on obligatory vaccination, but said that so far, “at this stage, no decision has been taken”.

Last week, Mr Véran and Autonomy Minister Brigitte Bourguignon wrote a joint letter to hospital and care home directors, saying: “Our objective is that by September at least 80% of professionals in elderly care homes and health establishments have received at least one dose.

“If this does not happen, we will open the way for mandatory vaccination for health professionals.”

The letter said that only 55% of workers in elderly care homes and extended care units are currently vaccinated with at least one dose.

“This is insufficient, especially considering the vulnerability of residents and patients in light of the spread of worrying variants,” they wrote.

On June 29, Mr Véran told FranceInfo Radio that vaccinating care workers would reduce the risk of waves of the virus among the elderly and vulnerable.

“I don’t want to incriminate carers – their work is complicated and they have had a very difficult year,” he said. “[But] the only way to put Covid behind us is to protect the most vulnerable among us; those who, even when they are vaccinated, are still at risk.”

Le Conseil scientifique is also in favour of reducing the acceptable capacity for events, and requiring a valid health pass to be shown for smaller events, too. Currently, only events of more than 1,000 people require it.

Accessing places such as restaurants, cultural activities, sports venues could be made dependent on it as well, with the focus on proof of vaccination, the Conseil said.

Proof of a recent Covid test should still be allowed as well, but providing free tests could be phased out by the autumn, and they could become paid-for as they are in several neighbouring countries (such as they UK, where they are only free for those with symptoms or having been in contact with infected people).

Professor Alain Fischer, head of the government’s vaccination programme, has also recommended that the pass could be necessary for access to public places such as cinemas, theatres and restaurants. This could push more people to get vaccinated, he said, as non-vaccinated people would be effectively barred.

“Tests for ‘personal convenience’” should no longer be free from September, he said.

The Conseil scientifique has also warned of the dangers of people returning from foreign holidays with Covid, especially the Delta and other variants.

It stated it is therefore important to inform people of potential risks and to do a maximum of testing of people arriving, especially from countries with high incidence rates or a high level of the Delta variant.

PCR tests 48-72 hours before coming should be required, it said (currently antigen tests are acceptable and no tests are required for those who have been fully vaccinated).

Covid France: What extra measures could help stop Delta fourth wave?
MPs to debate obligatory Covid vaccination in France - but for whom?
Head of rural French mayors calls for mandatory Covid vaccines for all