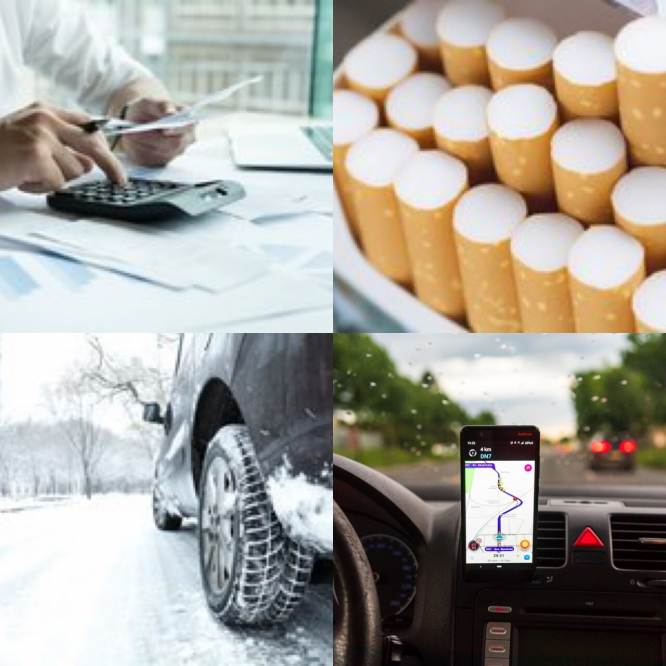 Some of the changes that residents in France may experience this November Pic: 88studio / New Africa / Fongbeerredhot / Vlad Ispas / Shutterstock

The month ahead will bring TV licence bills, slight changes to some pensions and the launch of Mois sans tabac, making November the best month in which to give up smoking among other things. We recap the changes.

A phantom rise in gas tariffs

Regulated rates for gas power in France should in theory have increased by 15% in November, following a 12.6% rise in October.

However, the government announced on October 1 that it would freeze regulated tariffs until April 2022 when prices are expected to have come down.

Read more: Gas, electricity, petrol: See how your bills are rising in France

This means there will be no immediate increase for the nearly five million people who are either on a regulated tariff or whose bills are indexed on this government-set rate.

However, the freeze means that these households pay more than they would usually during the spring to allow gas providers to recuperate their costs.

November is the month for paying your TV licence - redevance télé - and the residence tax taxe d’habitation, the bills for which normally arrive at the same time.

Taxe d’habitation is being gradually phased out for main homes and only 20% of the highest income homes will have to pay it this time round. It remains in full for second homes.

These 7.2 million higher income households who will still pat the tax will benefit from a 30% reduction this year, equating to a €363 saving on average. In 2022, the reduction will be 65%, and by 2023 no main homes will have to pay the tax.

The redevance télé TV licence fee is owed by any household which owns a television, even, in some cases, if you are exempt from paying taxe d’habitation.

Read more: French TV licence fee: Who is exempt from paying this year’s €138?

The TV licence fee amounts to €138 for residents of metropolitan France this year.

Taxe d’habitation and redevance télé bills must be paid by November 15 if by direct debit or cheque, or November 20 if you pay online via the government portal.

If you have not yet received your bill, it means that you have until mid-December to pay (your bill will also show this).

US borders open for people travelling from the EU

The US will be opening its borders to fully vaccinated travellers from countries including the Schengen zone and the UK on November 8.

Passengers will need to have proof of being vaccinated by a Food and Drug Administration or World Health Organisation-approved vaccine, at least two weeks prior to travel.

Read more: Eight updates for air, ferry and rail travel to and from France

Under-18s and people with certain medical issues will be exempt from vaccination requirements but must still provide a negative PCR or lateral flow test taken in the three days before travel if over the age of two, as must vaccinated adults.

A change in the price of cigarettes

In November there will be a slight increase in the price of some cigarettes while others become cheaper.

An end to some police trap reports on sat nav apps

A new French law gives the Interior Ministry and individual prefectures the power to ban alert messages signalling the presence of certain police traps on certain roads through sat nav apps such as Waze, TomTom or Coyote.

It will take effect on November 1 and specifically targets alerts on operations including alcohol and drug checks, as well as searches during terrorist attacks and kidnapping incidents.

Alert messages will remain invisible for two hours, or up to 12 hours in the case of more serious events such as abductions.

The temporary ban on police check warnings will apply across departmental and municipal roads, and will stretch for 10km around the scene of the trap in rural areas, and 2km within towns and cities.

App users will therefore be free to continue warning other drivers about speed traps.

In order to hide alerts within the sat nav services, the police will have to contact the app operators. Drivers will not face penalties for publishing an alert.

Snow tyres will be mandatory for vehicles in several mountain communes in France from November 1.

The requirement will remain in place between November 1 and March 31 every year, and applies to all cars, vans, buses and HGVs, even if they are only passing through the affected area.

However, the government has stated that drivers found without them will not be punished this year.

The new rule, dubbed the ‘mountain law’, will require vehicles - including campervans - that drive in the affected mountain communes to either:

The chains or socks must be suitable for at least two ‘driving’ wheels (such as the rear wheels on a rear-wheel-drive vehicle), and the driver must be able to fit them if and when needed.

If using them, winter tyres must be fitted to all four wheels and must be marked with either “M+S”, “M.S.” or “M&S”, and/or the “snow mountain” logo to be valid.

Vehicles with studded tyres are not concerned by the requirement.

Read more: Where in France will snow tyres be mandatory under new November law?

Further information is available on the French government website.

November will see the sixth edition of Mois sans tabac (A month without smoking), the month in which thousands of people across France attempt to give up smoking.

This year, 71,600 people have already signed up to the online platform, where participants can access a “consultation with a professional” who can guide them through the process of giving up and increase their chances of success by 70%, according to Santé publique France.

The French national health agency also states that avoiding cigarettes for 30 days makes you five times more likely to give up for good, as after one month withdrawal symptoms begin to ebb away.

The number of smokers in France declined between 2014 and 2019, but stabilised in 2020, increasing among more deprived communities.

Thirteen million retirees who are on Agirc-Arrco complimentary pension schemes will see their pensions rise by 1% in November.

This is less than the rate of inflation, which is forecast to be 1.5% this year by France’s institute of national statistics, Insee.

The 1% increase comes after pension schemes recorded a €4billion deficit in 2020, as a result of the Covid pandemic.

Valérie Batigne, the president of pension advisor company Sapiendo, estimates that over the last 10 years, pension values have risen at less than half of the rate of inflation. On average, this has resulted in a 4% shortfall on the pension schemes of private sector workers.

Between November 1 and March 31, tenants cannot be evicted from their homes, unless the property is unsafe, occupied by squatters, or if a renter is rehoused in a flat or house which is better suited to their needs.

Providers are also banned from cutting off a household’s electricity or gas during this period.

Landlords can begin legal eviction proceedings during this time, but the tenant will not have to leave the property until the winter is over. Any landlord who tries to evict a tenant themselves could face three years in prison and a €30,000 fine.

The government can decide to extend the length of the eviction ban, as it did in 2020 and 2021.

A rise for agricultural pensions

The minimum amounts for agricultural pensions are being boosted from 75% to 85% of the Smic (minimum wage) for farming. That equates to €1,035.

This only applies to the head of the agricultural holding, on the condition that he or she already claims his or her pension(s) in November 2021.

Farmers that are still working and partners who co-manage the agricultural holding are not concerned by this.

Finally, there are two public holidays which take place in November in France.

living in France
More from French news
More from Connexion